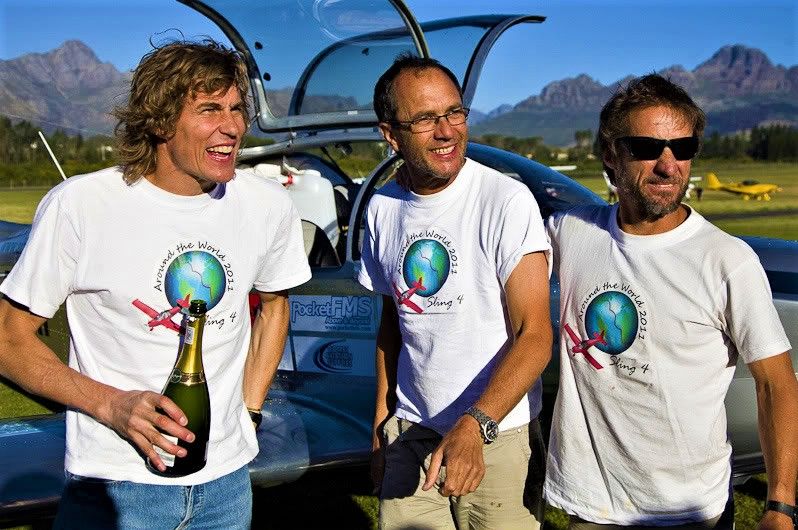 James, Jean and Mike landed a short while back at Tedderfield Airpark completing the final leg back home.

If you missed the arrival, have a look at our live broadcast which was recorded at Justin.tv/airplanefactory

Also, there are some great photos posted on our one South African aviation forum. Click here to view the photos taken

Thank you to Paul Venter, Vaughan Russel-Smith, Bruce Perkins and all the other people who took photos on our arrival day.

.
.
The guys entertaining the crowd

.
Nice to be back home
Flight very happy to see Jean

Flight helping with the wood for the barbeque

The guys landed a short while ago at Parys airfield to meet up with their “arrival party”. They will depart soon and fly towards Tedderfield Airpark

Thanks goes to Signature FBO, Stellenbosch Airfield, Anthony Allen, Richard Adcock, Justin de Reuck and everyone else involved in making the arrival in Cape Town so fantastic and for those who sent through pictures too to our email address!

Tomorrow (Saturday 24th September) Mike, Jean and James will fly together in the Sling to Tedderfield Airpark in Johannesburg where this fantastic adventure started from.

Mike and Jean departed from from Cabo Frio, Brazil at 10:42Z.

ZU-TAF will set course for 34S 31W to take advantage of the westerly winds as soon as possible. Low cloud is expected for the first 4 hours of the flight with light NW winds. ZU-TAF will be climbing to 3,500ft initially thereafter 5,500ft due to the fuel load.

At the turning point (34S 31W) to Cape Town further climb will be to 7,500ft and by mid way 9,500ft. The tailwinds are good along the mid sector of the flight with component of +30kts. Although they may encounter weather during the night no thunderstorm are forecast.

Approaching Cape Town will be on the low side as tail winds have drop to 5kts. We don’t expect any major weather to be concerned about with an estimated flying time of 27h50m and updates will be posted regularly on the chat board.

Estimated arrival time at Cape Town is Friday 14:32Z. We wish them a safe flight and our thoughts are with them each mile of the way.

The weather being willing the Sling 4 and her brave crew will be arriving back in South Africa on Friday 23 September 2011, having flown from Rio de Janiero to Cape Town, a record breaking and epic last leg of her around the world flight. Please follow progress on our website, www.airplanefactory.co.za. On Saturday morning, 24 September 2011 the Sling 4 will fly from Cape Town to Johannesburg to complete the circumnavigation. The occasion warrants a major celebration of the very high standard expected by The Airplane Factory of all its activities. So –

PLEASE JOIN THE AIRPLANE FACTORY FOR THE ARRIVAL PARTY

WHEN – Saturday afternoon, evening and night, 24 September 2011, starting with the arrival of the Sling 4 and her intrepid crew at Tedderfield Air Park in Johannesburg (ie – about 14h00, but follow on the website). There’ll be an opskop afterwards continuing, we expect, until late into the night – arrive any time you like.

FOOD ETC- The Airplane Factory will supply braai fires, drink cooling facilities, limited drinks and a reasonable supply of boerewors rolls. Please bring drink and meat if you require anything more extravagant than a boerie roll!

THEME- Please dress to the theme of “The Global Aviator”. The Sling 4 ATW crew will have no alternative, as they’ll be remaining at the airfield after arrival. Guests not dressed to theme will be forgiven, but will be expected to remove any non-themed clothing.

PILOTS- The Sling 4 will be flying from Stellenbosch to Tedderfield on Saturday morning. If you wish to fly in with the Sling 4 please meet at Parys airfield (FAPY) at 12h30, expecting the Sling 4 overhead at about 13h00. Marc Gregson (082 392 3149) will brief on procedures at FAPY at 12h45.

DIRECTIONS- Take the M1 south out of Johannesburg past Gold Reef City. Then follow the signs to “R82 Vereeniging”. Go through three traffic lights. Then take next turn right marked “R550 Grasmere” (there’s also a Tedderfield Air Park sign). Tedderfield Air Park gate is 2km after the turn on the left.

Mike and Jeans sent more photos through from their time in Rio de Janeiro.

At Urca and Sugar Loaf Mountain
Marmosets monkeys are everywhere
.

Sunset in Rio
At the bottom at Praça Gen. Tibúrcio
The War Memorial

It’s interesting to see different people’s views on risk and justifiability in the context of flying. In 2004 I climbed the mountain in the attached photo. In doing that I got to twice the altitude that Mike and Jean will reach and I spent 4 weeks close to 20 000 feet (of course without oxygen). It was cold, we spent nights hanging from ropes and there’s no question it was risky. In that context quite substantial risks seem to be accepted. One of the fundamentals of aviation, as in rock-climbing, is safety. Both disciplines focus on safety in what is generally an inherently adverse environment. One’s views on the right approach I suppose are ultimately closely linked to one’s deep personal philosophical views.

Meanwhile, some more thoughts on this leg, in response to the preceding posts –

This flight really is being done in the context of a carefully planned adventure by participants who have chosen to do it. There are no passengers who will be placed at risk. (The position is of course nothing like a commercial aviation service).
This isn’t a case of “get-home-itis”. The possibility of flying Rio to Cape Town was in fact raised even when the aeroplane was being designed and built. My initial post on the Rio – Cape Town leg may have been a bit misleading. Mike and Jean are indeed looking forward to getting home, but they’re not going to take any chances to shave off a few days. They want to fly Rio – to Cape Town primarily because they love adventure and they can. They’re not really doing it because they’re home-sick!

Our MGL’s certainly do measure fuel flow to within 5% accuracy. Actually they measure it to within about a half percent. Also, after 5 weeks of doing nothing but flying around the world on long over-sea legs, often into headwinds, the fuel burn and flow calibration is tested, perfect and well-understood.

Weather forecasts really are pretty damn good nowadays and so weather isn’t properly speaking a factor entirely beyond one’s control – you wait, look at things and choose your moment. Unlike the flights as far as LA, Mike and Jean now have real time in flight weather updating as they go (via the Indigosat tracker and also the sat phone if they want).

There’s lots of time to plan flights like this. Turn around points and points of no-return are decided well in advance and re-calculated on an ongoing basis taking into account winds, predicted weather and so on. There’s no suggestion that that hasn’t been done well in advance of take-off, particularly by pilots as experienced as Mike and Jean (both of whom are right now also 100% “in the groove”).

There’s no suggestion that the pilots are planning to fly at 13 000 feet for extended periods – I referred to that altitude only to illustrate that fuel burn is related both to throttle setting AND altitude. (That having been said, there’s no question that conditioned people can fly indefinitely at altitudes very much above that in complete safety where necessary).
Although there are no alternates on the way which have landing strips, the island of Tristan da Cunha passes not too far south of track and they could put down in the cabbage patch near the town in the case of an absolute crisis. They could also parachute down nearby and so on. Not an attractive option, as there’s apparently only one ship that services the island per year, in February, but hey, you never know where life’s going to take you!

Finally, and this is the kind of thing that you do have to consider, though you don’t for one minute expect it to happen – if the winds change unexpectedly and become too unfavourable, then as an absolute last resort the Sling 4 should settle into the sea somewhere a bit short of Cape Town. The pilots would be in immersion suits, personal satellite locator beacons attached to them and already activated, sat phone duly waterproofed, life raft, food and drinking water attached to their bodies, canopy unlatched, flares, water dye and so on at the ready. Their position would also be precisely identified by the satellite tracker. Under those circumstances one could expect a costly and embarrassing, but probably successful rescue operation.

Those are my thoughts. I absolutely accept that other people have different views (and probably their views are more main-stream – I’ve certainly been told, I think jokingly, but nevertheless with a hint of seriousness, that my personal calibration of risk and reasonability has gone haywire!) Also, I’m particularly sympathetic to the view that actions may cause damage to others, for example through damage to the reputation of general aviation or rescue cost or suchlike. There’s definitely a selfish aspect to embarking on reasonably expensive and risky adventures like this. And I’m still not sure whether you look at all the pros and cons and then just go with your gut, or start with your gut and then look at the rational justifiability. Right now I err on the side of reason. Maybe a bit of both is the only way to live your life, shifting the balance as circumstances suggest are appropriate. I do know that both Mike and Jean have thought this through clearly, are totally reconciled with what they’re doing and are very, very excited. I’m just sad I won’t be with them! 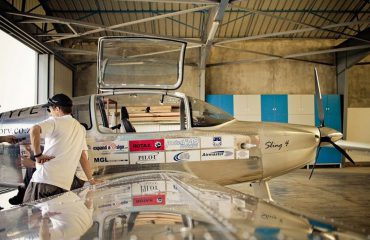 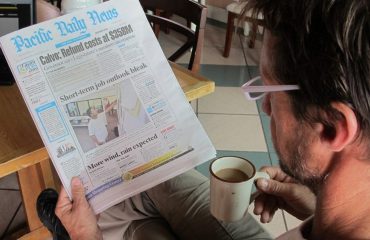 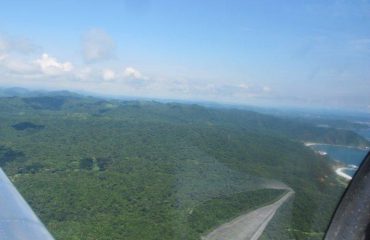