Construction continues on the prototype Sling 4 while plans develop -18

During the last two weeks there have been a number of changes around The Airplane Factory. While construction of Slings and Sling kits continues apace, a slightly different beast is taking shape in the northern quarter of hangar 7, directly under the watchful eyes of the company directors. Good progress is at last being made on the Sling 4. As appears from the photographs below, the lower half of the rear fuselage has already been riveted and the slight change from the standard Sling in the shape of the upper half is in evidence. The main and rear spars of each wing are loosely in place, and all 6 of the fuel tanks, which will give the aircraft an endurance of 24 hours when filled, have been sealed and are busy drying. Last night Jean and Chris Pietersen worked until 11pm in the cold hangar in order to achieve that.

Meanwhile, Gareth Bosch is working hard on planning the wiring system for the aircraft, which this time around will use a Vertical Power VP-X Sport electronic circuit breaker mechanism which is reputed to be highly reliable, easily configurable and provide excellent electrical system reporting. This will be the first Sling with the VP-X system. More generally the instrument panel layout has been settled and will be panel itself will be laser cut within the next few days. It contains two very sexy G2 MGL Odyssey EFIS instruments, a Garmin SL30 navcom radio, a Trig mode S transponder and the controller for the Airmaster AP320 constant speed propeller. Not much else is required. This time there will be no stormscope, although a Zaon PCAS traffic collision avoidance system will be plugged into and display on the MGL Odysseys. See the computer generated panel below.

Finally, time constraints have led to late night discussion on the most appropriate routing for the trip. Although the plan has, until yesterday, been to travel east to Oshkosh, and head back still going east, that requires 10 legs of which at least 3 are of more than 18 hours flying time and another 3 more than 14. Plus, travelling east the days are effectively shorter and, when tired, “tomorrow morning” comes quicker!

The flight from Johannesburg to Oshkosh going west, by comparison, has only 6 legs, all of which are less than 15 hours, and of course the days are effectively longer. So, right now it looks like it would be wise to reverse the planned direction so as to guarantee an arrival in Oshkosh before the show ends. Of course there’ll still be a great deal pressure on Mike and Jean to get there around 26 July, but at least it’s more likely to prove theoretically possible at first take off, without exceeding the speed of light. More about that later.

Construction commences on the prototype Sling 4 -17

The fuel tanks are sealed and the focus shifts to the canopy and centre fuselage. -19 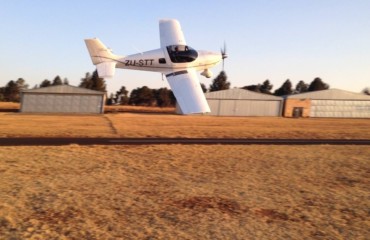 Great news from across the pond! -303