We&rsquo;ve landed in Conakry after such an awesome flight and just can’t believe that the satellite tracking didn’t work this time around &ndash; it’ll be sorted out by tomorrow if there’s any way to do it.

Last night’s flight was sooooo much easier, less stressful and therefore even more enjoyable than the flight to Sao Tome. I can’t believe how much Mike has learnt from me in just one flight (ha, ha!).

In our pre-take-off checks we found that one of the structural brackets supporting our electric prop pitch motor had broken, then Mike lowered the carb needles one notch to lean the carbs for better economy, and the fuel we put in was pretty appalling (leaded 97 mogas full of dirt and with a cloudy colour), so there was definitely a measure of uncertainty as we lifted into the air, (the prop pitch motor is now bound up with cable ties). Everything turned out fine though, the weather was absolutely perfect and soon we were really into the swing of things. What a beautiful flight &ndash; just check out the photos.

Although not as direct as the “straight to Conakry” approach, we chose to fly out at sea around the bulge of Africa the whole way for a bunch of reasons – there were predicted isolated storms over the land; the border between Liberia and Sierra Leone is a no fly zone so we had to go either north or south; there’s less hassle from ATC when you’re not actually over the country; and of course there’s no terrain to fly into in the sea! It was great to break the cloud about 15 miles out from Conakry though and see evidence of land for the first time after 14 hours.

No real problems through customs, though the ordinary African confusion . Didn’t pay a cent though, and now we’re ensconced in the very fine “Conakry Novotel” hotel. Haven’t seen our website for a few days, so I’m going to pop downstairs to try send this and will let Mike have a go a bit later. We’ve received loads of short messages, however, and they certainly sustain us when we’re up there alone. For a while we turned off all the lights of any kind in the cockpit and just sat looking up at the stars – it was completely awesome.

Looking forward to the big one to Brazil tomorrow and trying to decide whether a big night in Conakry or a good rest is the more important right now! 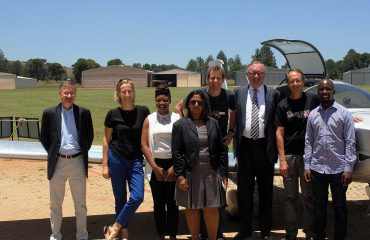