It’s past 1 o’clock am in Waikiki and we’ve been back from the “T-hangars” at the Honolulu International airport for just two hours. There seems to be a misconception out there that we’ve been resting up all day! Actually it’s quite different &ndash; our aeroplane is grounded by the FAA and we’re not allowed to fly until it’s been inspected by them and is found satisfactory such they are able to issue an “SFA” (Special Flight Authority). An SFA is the document required for an aircraft like ours to perform a ferry flight like that from Hawaii to California and in this case it’ll also have the effect of “un-grounding” ZU-TAF.

In our case the most important requirement for the SFA is that we have on board, satisfactorily fitted, an HF radio. The local FAA inspector, if satisfied, will make a recommendation to Washington DC, which will in turn grant us the required SFA. Washington’s 6 hours ahead of Hawaii, so communications can also be difficult. Nevertheless, the US being the US, we understand that there’s usually only a three hour turn-around time. Still, it means if we want to get going tomorrow (Tuesday, to meet Mike in LA the day after he arrives) we need to get started pretty early in the morning to enable the FAA to do what they need to do, and their wheels will pretty much need to turn like clockwork!

Looking back, we arrived in Hawaii yesterday to face the flak for our (genuinely unintended) violations of the legal requirements on communications. We’ve managed, in one day, not only to hire a car, find a hotel, settle in, do some exercise, eat and swim, read our website and Avcom and do a brief update, but also to locate a portable HF radio (we’re renting it, not buying it!), and we’ve even fitted it. Thanks Read and Jean for letting us hangar ZU-TAF in your hangar (Read and Jean plan a circumnavigation of their own in a couple of years in their Cessna 421!).

Thanks also to Gene Wilkie for your incredible help and enthusiasm. Gene too strolled across to say “hi” just after our arrival. We were introduced to his personality when someone said to us, “There’re lots of mechanics on the field, but here’s only one craftsman”, being Gene. Gene’s flown choppers in SA and elsewhere in Africa and so appreciates something of the African approach to things. Anyhow, he stayed late, helping us with installation of the radio, crafting components on his lathe instantaneously as we went. Jim Murphy, a ferry pilot, instructor, navy reservist and man of many varied skills also helped, not least with actually getting all settings on the radio in place and instructing us on the arcane subtleties of HF radio use.

Having fitted the radio, at about 22h30 Jim had us push the plane 5 yards out of the hangar from where he called “San Fransisco Radio”, 4 000 km’s away. Jean and I were flabbergasted when they gaily responded “Zulu Uniform Tango Alpha Foxtrot, go ahead”.

So we’re more or less ready to meet the FAA officials tomorrow morning. If it’s all greased lightening, we’ll fuel up, file a flightplan and otherwise ready ourselves while we wait for the go-ahead from Washington. Absolutely everything being in order, we’ll depart for LA early afternoon, to land early afternoon Wednesday. The weather looks pretty good, getting worse from there on out. Please don’t hold your breaths, though – if it doesn’t work out so quickly tomorrow, then we will just take the rest we haven’t really had and we’ll report back again more fully from our hotel room tomorrow night!

One last photo that somehow got left out yesterday is of Don and his son DJ who also came through to meet us when we arrived in Honolulu. We’ve been too busy to see them today, but perhaps if we don’t get off tomorrow we could cross paths &ndash; we’d love to have a bit more of an opportunity to check out the island. In fact what would have been great would have been to have had the time for a local sightseeing flight in ZU-TAF. This country is just such an aviation paradise &ndash; everything’s possible and even easy. We wish there was time right now to report on thoughts and impressions of Hawaii and the US. People are just so optimistic and supportive, and it feels as if anything can be achieved, all one needs is the energy and desire. There will, eventually, be time to do that from LA, we’re sure. Meanwhile, more time slices and catch-ups from “In the Jetstream”. 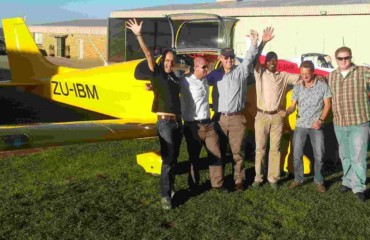