Some thoughts from James -262

I’ve only just got to the internet for the first time today, having again just looked at the numbers for the Atlantic crossing again. Phew, it’s closer than I thought!

Answers to a couple of questions –

When Michiel asked me about fuel consumption I was under the impression that he was talking about fuel consumption for the Sling 4 at ordinary weights. Although she performs incredibly well at heavy weights, the performance does change quite substantially when very heavy. Fuel burn increases quite substantially as she gets really loaded up (well, well above the ordinary MAUW of such an aircraft) and of course she goes slower. When she takes off in Rio she’ll be burning something like 27 liters per hour and she’ll be flying with high throttle settings because of the weight. Close to Cape Town she’ll be light and she’ll be burning about 23 liters per hour. The throttle setting will still be quite high, since she’ll probably be at quite high altitude, but even at 100% throttle, at 13 000 feet she burns only about 24 liters per hour. Overall I think the average fuel burn will be 25 liters per hour, and that’s what we’ve worked on. Incidentally that’s not particularly conservative, it’s probably almost dead on – for reasons which I’ll explain below.

On the question of speed – it seems that the Sling 4 likes generally to cruise slightly faster than the Sling 2, but at a slightly higher throttle setting and burning just ever so much more gas. Because she’s has a turbo motor she likes to cruise quite high. At ordinary weights she’ll cruise comfortably at 115 knots (TAS) at about 9 500 or 11 500 feet, but she’ll be burning about 23 liters per hour. When as heavy as Mike and Jean will be, however, she’ll have a much higher angle of attack, more drag and go much slower. Also, she’ll be at a low altitude – probably 2 500 or 3 500 feet for the first 6 or so hours, then 5 500 feet for the next 6. There she cruises at only about 96 to 100 knots. At the weight she’ll be on this trip it may be even less for the first quarter of the journey. We’ve done our calculations for the journey on the basis of an average true air speed of 100 knots. Actually I think that that’s more conservative – there’s probably a little bit of fat in that. Since we’ve mostly flown lighter than the weight this time, however, it’s difficult to know absolutely for sure. Low altitude hours early on will also lower this figure somewhat. I personally hope that this is where we’ll benefit from conservatism.

On fuel burn and throttle settings more generally – I had many hours sitting gazing at the twin MGL Voyagers in the Sling on the first half of the journey. In a car when you throttle back mostly the fuel consumption per kilometer decreases. It’s not the same in a plane, though. There’s the famous “lift / drag bucket graph” which shows that drag relative to lift is minimised at a certain optimum speed / angle of attack. Slower than that (with a higher angle of attack) you get disproportionately more drag for the additional lift. All other factors being equal in principle you want to fly with a full throttle at a reasonably high altitude. Flying the Sling 4 for enough hours to become familiar the parameters through gazing at the instruments while changing throttle settings, my intuition was surprised by how high the throttle setting for optimum range always proved to be. It must be admitted that on almost the entire flight from Johannesburg to Los Angeles we flew into headwinds (which favour flying faster and burning more gas for range, relative to tail winds), but still I was kind of surprised. And this seemed to me to be exaggerated when the aeroplane was very heavy. We took off from the Marshall Islands with enough fuel for Los Angeles, including a good reserve, so we were heavy. Early on, low down, our speed was pretty poor, despite a high’ish throttle setting. We were burning quite a bit of gas, but any reduction on the throttle resulted in a substantial slackening off of speed – it just wasn’t worth it. So one find’s oneself little bit between a rock and a hard place! When that happens you’d better have done your homework in advance!

So that’s where it’s at. Actually endurance is only 29 hours, but hopefully Mike and Jean will be flying a little faster than the speed we’ve used to make the necessary calculations. Everyone please hold thumbs!

That’s all for now. As things stand ZU-TAF will aim to leave Rio about 0900Z (11am SA local time) on Thursday 22 September, aiming to arrive in Cape Town at about 1300Z (15h00 SA local time) on Friday 23 September. It’ll land at CT international to clear customs, hopefully quickly, then fly on to Stellenbosch where we hope supporters will join us for a celebration, hopefully commencing upon their arrival at 16h00 to 17h00. I’m going to fly down to CT on Thursday with Michiel de Koker in his Sling ZU-MDK (well equipped, also with a Rotax 914 and a nav radio), leaving exactly the same time as Mike and Jean. We’ll beat them there by about 22, we hope, follow them on the tracker through the night and meet them Friday. We’ll all fly back together on Saturday morning for a party at Tedderfield Air Park, The Airplane Factory’s hangar, starting with our arrival at 14h00 Saturday and continuing until late into the night. Theme for the party will be announced tomorrow, together with details for those who wish to fly in with the Sling 4. For now fly-along is projected to start at Parys at about 13h00.

Oh my golly, more changes from these lunatics -239

Sling goes down during testing -128 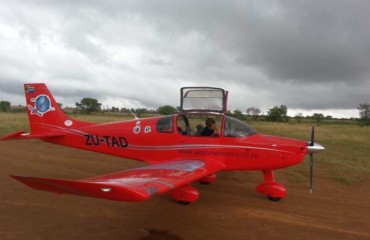