Howdy everybody! There is so much I want to tell you all about life in our shiny bullet as we tunnel our way through the atmosphere of our lonely planet, but time and my typing speed just don’t allow. Jet lag is not the word, maybe “bullet-bushed” is more like it, but travelling east, gaining about two hours each leg, as well as losing a “night dose” of sleep each time certainly makes one feel a tad fatigued.

Life between shut-down and the next start-up is interesting, eventful , tedious, exciting, exhausting, educating, sometimes too short and sometimes way too long! It’s also not what I am going to share with you, I want to share with you the stuff that happens between start up and shut down as well as the emotions before each leg. If I could type faster I would have you with us all the way, but for now let’s go to the Business Centre on the 19th floor of our hotel in Taiwan.

The Japs had forced us to re-route east across the Pacific. We were both a little peed off, but also secretly relieved that we would not be needing to don Chalkie’s immersion survival suits, be brave crossing the Bering sub-zero seas and attempt a landing in Adak islands cauldron of meteorological surprises.

James was in our room on his laptop doing attending diligently to flight planning and I was up there, over-looking the city of Taoyuan from behind a computer, checking weather for the new leg to Guam. We needed to decide on a departure time and date. The weather was looking less than perfect to leave that evening with a typhoon moving toward our flight path from the southern Phillipine seas, storm cells developing all around Guam, rainfall predicted for the first two hours of the leg and. Worst of all, weather developing at the half-way point and destination. Probably no self respecting pilot would for one moment even consider jumping into a little four-seater, prototype, experimental aerie at two am and head out into the night to cross the Pacific for 14 hours.

I had just printed the weather from a new site which confirmed Sias’ predictions, when James walked in. Now when you get to know James well you learn his oddities and behavior traits. He sat on the window sill with the cityscape behind him, got that look on his face and started off “Jean, you know……. this weather is really really shit! But if we don’t fly tonight we are going to be stuck here for a week. So I think we just go?!” All of that blurted out with no eye contact, and then he looked at me.

To share that double bed with him for another week and smell rancid sewerage when leaving the hotel was far more horrifying than the thoughts of a 14 hour dance with the elements over the warm Pacific. Decision made! The rest of the day was spent preparing for Guam.

Fast forward past the flight plan fiasco (Jap crap again) to climb out at 3am into a dark sky, gas for 20 hours on board.

The lights of Taiwan cities twinkling below us created a perfect horizon for VFR flight. The clouds were glowing white from the city light and appeared quite friendly. We thought to fly below them in the rain, but seeing them like this decided to go over them. This turned out to be the right choice. The sun would be up in about three hours and things were looking good. We did need to stay sharp and dodge a few big puffies, but all in all happiness prevailed in the little capsule. Dawn was born and coffee and breakfast was served. Tailwind was good, fuel plenty and skies ahead looked friendly. About four hours down only ten to go. Thanks to the Jap crap we would be into Guam a little after sunset. Not too serious, might be raining a bit and so what if we didn’t have plates, they could just vector us in or we could do a VFR or at worst a special VFR approach. Long lazy chats and snoozes prevailed for the morning.

Then the horizon changed, the thin line of weather that was on the horizon now grew into a mighty big wall of the finest convective sculpture with a beauty beyond my vocabulary, hiding within it probably enough energy and water to supply the world’s largest city for a year. Now, we needed to get right through the centre of that pretty little show that the Pacific was orchestrating for us. From our front row seat we applauded the spectacle and then started to prepare the lounge and convert it back into a cockpit of a storm-boring bullet, so we started to discuss our strategy.

There is only one way to get to the center of this baby – Lima Lima (low level), in the rain. So from an increasingly unsettled sky we slowly descended to 1 000 ft above the sea , set the alti to GPS altitude, firmed up life jackets and seatbelts, checked the life raft daisy chain(raft, supplies in a sealed container and water tied together), ensured our PLB’s were tied to us (thanks again Chalkie) and turned up the music! Casper Mod!

It is like flying through a wall into another reality!

[Time up for me, I’ll continue in Hawaii]

Weather prediction for the leg to Hawaii -220

Permission woes for James and Jean -198 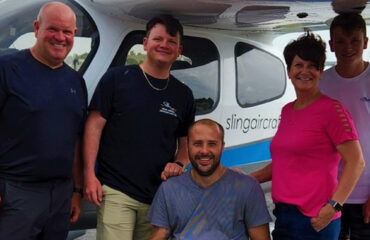