On Saturday 25 October 2010 The Airplane Factory celebrated not only its arrival at the Tedderfield Airpark, but also the first flights of the first two Sling aircraft built using its production facility. ZU-NRC, purchased by Andrew Lane, flew at approximately 10h00, and ZU-TAE, the Airplane Factory replacement aircraft, flew just before sunset the same day. Both aircraft sported beautifully finished, compound curve, perspex canopies developed and manufactured by The Airplane Factory team. And both aircraft flew flawlessly first time around. TAF is now busy completing the flying proving hours on each airframe and these hours should be completed within the week.

The ensuing hangar wetting party fulfilled all expectations and continued until well after 2am. Thank you to all who attended and supported us, especially those who showed their commitment to the &ldquo;cross-dressed aviator&rdquo; theme. Mike, Jean and James were delighted to discover their employees&rsquo; penchant not only for hard work, but also for cross dressing. Gareth and the drafting team took the cake! –gallery2–

Following some emotional words from the company founders, the three completed aircraft meant that James was at last able to fulfill his side of his bet and have his hair cut. What followed was the first haircut administered, one cut each, by 40 people, to a transvestite aviator. The results were remarkably good considering the circumstances! –gallery3–

TAF will be delivering another 2 aircraft in the next three weeks and by November month end, for the first time ever, five Slings will be able to fly in formation with one another. Photographs will of course follow. TAF is now able to manufacture two aircraft per month and will be demonstrating its replacement demo plane at all opportunities. Please contact us if you have an event at which you would like the Sling to appear, or if you would like to take a test flight. TAF&rsquo;s immediate focus is now to complete the final aircraft and manufacturing approvals so as to place the business in the position to deliver aircraft to all who are interested.

ZU-MDK, the first Sling home build, takes to the air and ZU-TAE appears at the Joburg Food Wine and Design Fair -139 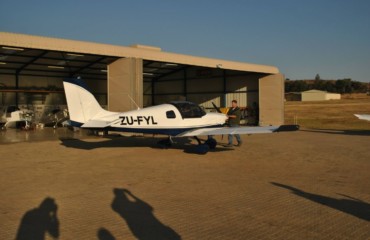