Clocking up the hours, writing lists and getting a US view on things -169

So things really are moving on – as at 14h00 today the (peerless) Sling 4 prototype has 23 hours on her airframe and Mike and Jean are off towards Durban to put on some more, test the fuel transfer systems, test the satellite tracker, do more work ascertaining exactly the best power settings for economy and generally just have a good time. You should be able to monitor their flight superimposed onto Google Earth on our website. Actually I can see them right now just east of the Wilge River!

Yesterday evening we had a great time flying a test flight and photographic sortee for SA Flyer’s Guy Leitch who never seems to be without a plan. This time he had Major Kevin “Cuda” Currie, the Air Attache for the US in South Africa, come through to test out the plane while he and John Mitchell took photographs from FBI, the SA Flyer C182.

Although Cuda’s temporarily doing a desk job here in SA (the Air Attache co-ordinates air activities between the US and the country he’s responsible for, typically military ones) he’s an F15 pilot who has seen action in Afghanistan and Iraq. Despite not being particularly current he flew a very tight formation with ZS-FBI for the shots. See below for the general idea. To find out his views you’ll have to buy the September edition of SA Flyer, but he certainly had a smile on his face after the flight!

All ZU-TAF’s systems are go and departure remains 10h00 from Tedderfield on Saturday 6 August. We’ll fly direct to Virginia for lunch where any interested Durbanites are welcome to come by, probably best between about 13h00 and 14h00, to have a look at her. Then the hop up to King Shaka to fuel up fully and clear customs before heading off to Reunion.

More as we go.

Looking at the weather for this leg -190

Jean d´Assonville appointed a director of The Airplane Factory -131 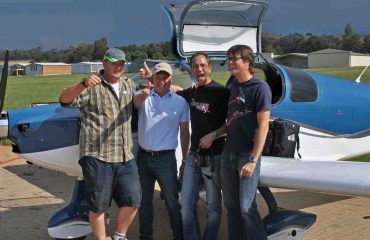